The importance of cc:license for the discoverability of open access articles in hybrid journals

Only a few years ago, hybrid journals, in which some articles are open access (OA) and some are behind paywalls, were regarded as a passing phase which would eventually fall by the wayside in favour of purely OA journals (gold OA) and/or self-archiving (green OA).  Whatever may be your opinion of hybrid journals, one thing is obvious, their number has recently increased.  There are several reasons for this, including a demand from researchers, often due to funding mandate requirements, to publish OA content in reputable subscription-based journals.  Most hybrid journals were previously high-profile subscription-only journals, and converted partly to accommodate this demand.  Publishing OA articles in hybrid journals is now an accepted practice, hybrid journals are playing an important role in the OA process, and it is likely that they will continue to be an essential part of the publishing industry for years to come.

However, visibility and discoverability of OA content in hybrid journals can be problematic, as Nettie Lagace and Christine Stohn explained in the 20 October 2017 issue of UKSG eNews (UKSG eNews 407).  Lagace and Stohn found that various issues have hampered the take-up of NISO ALI (Access and License Indicators (NISO RP-22-2015)) recommendations for article-level descriptors in machine-readable form.

Is there an alternative solution for the automated identification and discoverability of OA articles in hybrid journals?  Yes, there is.

A picture can be worth a thousand words.  In Figure 1 below we show how JournalTOCs, the largest aggregator of journal table of contents (TOCs), is using the cc:license tag to identify and indicate OA articles from hybrid journals. 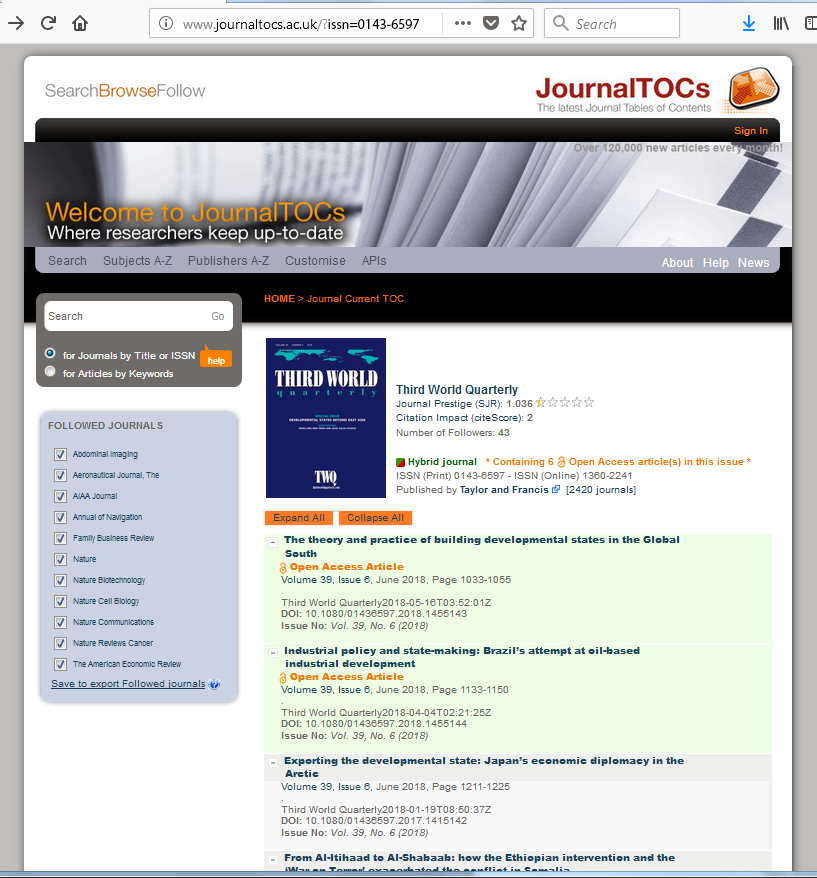 How does this work?

A 2015 survey undertaken by the JEMO Project found that virtually all hybrid journals were using CC licenses.  A very small number of publishers (notably Elsevier), offer a choice between a CC license and their own OA licenses, which are typically much more restrictive than CC.  However, most funding bodies mandate that articles must be licensed as OA using the CC-BY license, and do not accept the use of publishers’ own OA licenses.  In practice, therefore, the number of authors selecting publishers’ proprietary licenses is negligible.

At the same time, many publishers were familiar with the correct use of RSS feeds thanks to the pioneering work of the ‘Recommendations on RSS Feeds for Scholarly Publishers’ document.  These ‘Recommendations’ stimulated the widespread production and provision of useful RSS feeds by publishers.

The solution to problems of identification and discoverability of OA articles in hybrid journals, as proposed by the JEMO Project, was therefore to include CC license information in journal Table of Contents RSS feeds.  JEMO showed publishers how it was possible to include CC tags or metadata elements in their RSS feeds, and consequently, publishers found it technically easy to add the cc:license tag to their feeds, to enable the identification of their OA articles by CC license type.

As shown in Figure 1 above, this has created an effective way to automate the identification of individual OA articles published in hybrid journals after the feeds have been harvested.

Importance of hosting platforms in the discovery of OA

Six publishers using the Atypon platform have started to use the cc:license tag in their TOC feeds since Atypon offered this option in May 2018:.  They are: the American Society of Clinical Oncology, FASEB (Federation of American Societies for Experimental Biology), the Physical Society of Japan, Taylor & Francis, Vandenhoeck & Ruprecht, and Wageningen Academic Publishers.

Figure 2: Approximately 60% of the 31,569 journals aggregated by JournalTOCs provide or could easily provide discovery of OA articles via RSS feeds, half of them using the cc:license metadata tag. (Source: JournalTOCs Aggregator Database. Consulted on 30 July 2018)

By making OA content in hybrid journals easier to identify, publishers and hosting platforms are helping the OA movement.  A transparent and easy exposure of OA from hybrid will motivate authors to select OA, increase the number of OA articles published in hybrid journals and consequently accelerate the conversion of hybrid journals to full gold OA journals.  We hope that more publishers, hosted on Atypon or elsewhere, will begin to see the benefits of using the cc:license in their APIs and RSS feeds and will choose to make OA articles even more accessible to eager readers.

These views are the authors' own and do not necessarily reflect the views of UKSG.

The importance of cc:license for the discoverability of open access articles in hybrid journals