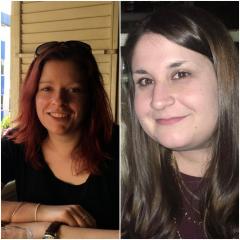 In September 2019 we were the recipients of a UKSG Innovation Award to set up EARLL (Early career Academic and Research Librarians in London), a new professional network for early career librarians in academic and research institutions based in and around London and the south east of England. We’d like to reflect here on what we’ve been up to and what we plan to do next.

We had both been feeling frustrated with what we perceived to be a lack of support and CPD opportunities for early career librarians. The prohibitive cost of most training events and conferences meant they were usually reserved for colleagues at higher grades. Existing professional networks tended to be national, focused on subject specific areas or aimed at librarians in senior management roles. We felt that London and the South East was a unique regional area with a high number of research institutions and academic libraries clustered in a relatively small geographical space, and we spotted an opportunity to create a formal network to foster communication and support early career professionals in the region.

For Hannah, the seed of the idea that later became EARLL was planted at Wiley’s Early Career Librarian Workshop, held at their Oxford headquarters in January 2019. By far the most rewarding part of the day was meeting other early career librarians and hearing their thoughts and perspectives on the challenges we faced. After returning from Oxford and after discussions with Nicola Wright, the LSE Library Director, we started to discuss the possibility of setting up a professional network together.

We were both intrigued by the idea but we had no experience of running a network and limited experience of the skills we’d need to do it successfully (marketing, event planning, people management, etc). Also, we had no money... Then we spotted the announcement from UKSG about the Innovation Awards, offering to mentor and financially support new initiatives (including professional networks). We submitted our application and a few weeks later we were thrilled to find out we had been successful! The challenge of setting up EARLL was about to begin . . .

Who is EARLL for?

A key challenge for us was to clearly define who EARLL was for. In the library sector, “Early career” is commonly defined as five years after qualification, or after you started working in a library. However, many EARLL members don’t fit these strict definitions. We have members who’ve worked in libraries for years in paraprofessional roles, members who’ve taken time away from work before returning and so have passed the five year deadline, and older members who worry that ‘early career’ = ‘for young people’.

With so many differing individual circumstances, we wanted our definition to be as broad as possible. So here’s what we think — it doesn’t matter how long you’ve worked in libraries, what age you are, what grade you’re working at or whether you have the qualification; if you are interested in exploring new avenues of the profession, meeting library colleagues in and around London and broadening your skills through professional development, then you count as ‘early career’ and EARLL is for you!

Next we had to decide on a name, and it turns out that coming up with a network name and a snappy acronym is not an easy thing to agree on! After several weeks of arguing, we eventually settled on EARLL, an acronym for Early career Academic and Research Librarians in London (and yes we’re pretending the C doesn’t exist!). Similar discussions were had around the design and content of the website and twitter feed and the design of our wonderful bird logo (of which we’re especially proud).

Next we wanted to set up a formal committee to help us to run EARLL. Through the lis-e-resources list, we put out a message about EARLL with a call for interested people to get in touch, and we received responses from colleagues at LSE, Senate House, and later Roehampton. You can find details of our committee members on our website — they come from a range of backgrounds with different experiences in academic libraries.

The committee help with the day to day running of EARLL as well as event planning and decision making. Committee members can also take the lead in areas that interest them, for example coordinating our social media strategy and the design of our website and newsletter.

We wanted to hold a launch event for EARLL to bring early career librarians together at a networking and CPD event where they could also discuss their issues and contribute their ideas to guide the development of the network.

Attendees came from a broad range of research institutions and from diverse backgrounds. They engaged enthusiastically in the group discussions, discussing the challenges that early career librarians face and providing EARLL with a huge amount of information on which to base future activities and focus on areas for advocacy. We also had two expert speakers who contributed their knowledge and experience to the day; talking about the key skills and knowledge that the academic librarian of the future will need and recruitment from the perspective of a hiring manager.

We’ve written up the launch event in two blog posts which can be found on our website.

We are now turning our thoughts towards the future. Unfortunately, due to the situation with COVID-19, our event plans are being put on hold for the foreseeable future. We are currently working on our website content, writing blog posts and soliciting external contributions (please get in touch if you’d like to contribute a blog post: ukearll@gmail.com).

COVID-19 has thrown us off course a bit, but we’re excited about the future for EARLL. We hope we can foster communication between our members and help with CPD during these difficult times. If you haven’t already, please subscribe for content updates and our weekly newsletter via our website. We’re also looking forward to working with UKSG to host more events and networking opportunities to give early career librarians the support and encouragement they need to progress in their careers.

These views are the authors' own and do not necessarily reflect the views of UKSG.​